We have just completed a survey to assess the expected impact of Brexit on late payments within the UK. Our findings are quite frightening as they suggest that the majority of businesses, more than 83%, are expecting their customers to take longer to pay as a result of the economic impact of Brexit.

It was particularly striking to find that not a single company expected the current situation to improve as a result of Brexit.

The chart below shows the responses given to our survey of UK companies: 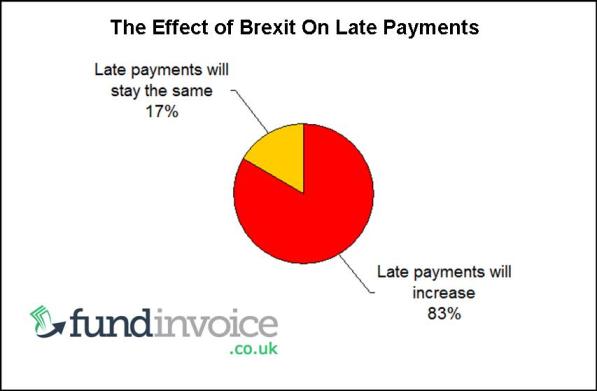 On the 29th March 2017, the UK Government led by Prime Minister, Theresa May, triggered Article 50 of the Treaty on the European Union. This action started a 2 year process, as a result of which, the UK will leave the EU in March 2019. The process involves extensive negotiations about the terms of the separation, and in view of this extended period there has been much uncertainty created about about the economic impact of Britain's exit from the EU.

In the last few days, the IMF (International Monetary Fund) have reduced UK annual GDP growth forecasts to 1.7% for 2017, citing the uncertainties around Brexit as a key driver of this decision.

At FundInvoice we have conducted our own UK late payment survey in order to understand the effects that Brexit is expected to have on this aspect of the UK economy.

We surveyed 256 UK companies, selected at random. They were taken, fairly evenly, from across the following range of business sectors:

In each case, we contacted a prime mover at the company and asked them the following question:

"How do you think Brexit will affect the time that your customers take to pay?". Respondents were asked to indicated whether they expected the number of instances of late payment to increase, decrease or to stay the same.

We then calculated average responses overall, and by sector.

The anticipated impact of Brexit is that the majority of businesses expect that customers will take longer to pay, with instances of late payment increasing.

Overall, no respondents expected an improvement in late payments, with the follow opinions on the Brexit economic impact given:

The effects anticipated were subject to a quite dramatic shift, according to the industry sector of the party that we were speaking to.

The following graph shows the responses by sector, compared with the overall average: 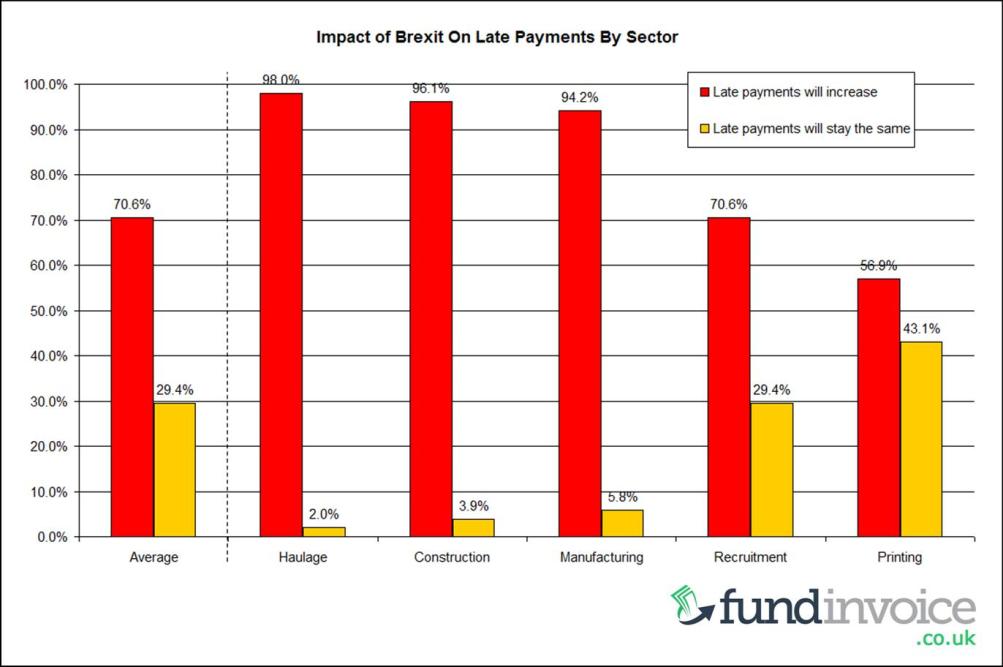 The Impact Of Brexit On Construction & Haulage

As you can see, the graph reflects a significant swing in opinions between different sectors. The haulage and construction sectors were anticipating the greatest impact as a result of Brexit, closely followed by manufacturing. In these sectors,there was an overwhelming expectation that there would be slow down in debtor payments.

The Effects Of Brexit On Recruitment

Recruiters expected a much lesser effect - but nonetheless a significant slowdown in customer payments. The recruitment agencies that we spoke to indicated that the impact on their sector would be 28% less than than on the haulage sector. Despite this, there were still more than 70% of those questioned in this sector that were expecting a deterioration in conditions.

The Impact On The Printing Sector

It may also be worth noting that extended credit terms are often already taken in the print sector, it may be that terms are already stretched, hence the anticipated future impact is less. However our survey did not address this particular detail.

In addition to recent late payment legislation to give businesses the right to charge interest on overdue debts, the Government has also introduced legislation requiring large companies to report and publish their payment practices twice a year, including the average time that they take to pay their suppliers, many of whom are small businesses. The hope is that this type of public scrutiny will encourage large businesses to pay their small suppliers more quickly. The degree of influence that this has remains to be seen.

The other issue is of course smaller businesses paying late. In some cases even the threat of a few months overdue interest may be seen as a cheap option to take the extra extended credit that they need.

Some action has been taken by the Government, to try and tackle UK late payment culture. For example the introduction of legislation to enable the charging of statutory interest on overdue debts as a right. However, this does not seem to have had a huge impact on the problem.

The Atradius payment practices barometer from Spring 2016, suggested that 44.3% of B2B sales in the UK were on credit terms. Apparently 90% of British businesses had experienced late payments during the last year. Against average credit given, the average time to receive cash from a credit invoice was 52 days, with delays being largely due to liquidity constraints. The Atradius survey found that the B2B customers in the construction sector were the slowest payers.

Our research suggests that this position is likely to deteriorate further in the run up to the UK leaving the EU.

What Can You Do About Delinquent Payments?

So if the situation may be set to get worse, but what can you do about delinquent payments? We have set out some advice about tackling late payers below, in our top 10 tips for tackling late payments:

So whilst our results suggest that UK businesses are set to experience a slowdown in customer payments, there are plenty of simple steps that you can consider to try and mitigate or alleviate the problem of late payments.

Article - How to protect your business against the effects of Brexit.